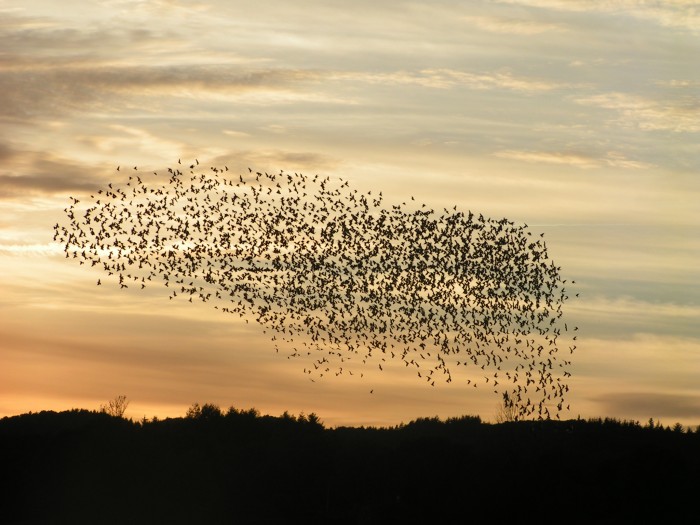 A portfolio consists of assets and investment capital. Portfolio optimization involves deciding how much capital should be invested into each asset. This becomes complex as constraints such as diversification requirements, minimum and maximum exposure to assets, transaction costs, and foreign exchange costs are introduced. Handling constraints can be difficult with statistical techniques so computer scientists have developed intelligent search algorithms which can be used to optimize portfolios. I used the particle swarm optimization (PSO) algorithm.

Portfolio optimization works by forecasting the expected risk and return of each asset in the portfolio. The algorithm accepts these forecasts as inputs and determines how much capital should be invested in each asset such that the risk adjusted return of the portfolio is maximized and the constraints are satisfied. The forecasts of expected risk and return for each asset need to be as accurate as possible for the algorithm to perform well. Various approaches exist and in this research I looked at three commonly used ones.

In my research I found that the third approach was the most accurate. I would recommend that readers interested in developing their own portfolio optimizers also try using recurrent neural networks to forecast the expected risk and return of each asset. Recurrent neural networks capture the temporal properties of data, and are therefore well suited to identifying trends. Also, by using a recurrent neural network one can use financial indicators to try predict the market. Predictions don't need to be completely accurate, they simply need to be more accurate than other forecasting approaches to be effective.

Diagram depicting how each particle in the swarm's position is updated relative to the global best (blue) and personal best positions (red) by the Particle Swarm Optimization algorithm.

Furthermore, the runtime performance of the algorithm was significantly improved by handling each particle in an independent thread and applying memoization to commonly used functions. Memoization is an optimization technique used to speed up the performance of computer programmes. For more information visit http://en.wikipedia.org/wiki/Memoization.

My implementation was done using Java, but for clarity and completeness I have included a Python implementation of a basic PSO at the end of this article.

The PSO algorithm can be used to optimize a portfolio. In the context of portfolio optimization, each particle in the swarm represents a potential allocation of capital between the assets in the portfolio. The relative fitness of these portfolios can be determined using one of many financial utility functions which balance risk and expected return. I used the Sharpe ratio as this has become an industry accepted standard for benchmarking portfolio performance. Consider the following illustration of the PSO applied to a portfolio consisting of three assets,

The grey particle translates to the vector (0.5, 0.2, 0.3) meaning that 50% of the portfolio's capital is allocated to asset one, 20% to asset two, and 30% to asset three. The expected Sharpe ratio for this allocation is 0.38 which is less than the personal best position (red particle) and the global best position (blue particle). As such, the position of the grey particle is updated such that it is closer to both the global best and the personal best particles.

Illustration of portfolio optimization using particle swarm optimization (PSO). The grey particle is updated such that it is closer to the global best and it's personal best. The resulting vector is better than it was before.

Illustration of portfolio optimization using particle swarm optimization (PSO). The personal best position (red particle) has now been updated to be the current position of the particle.

The real challenge with using a particle swarm optimization is making sure that the constraints of portfolio optimization are satisfied. As mentioned previously there are many constraints. The most common constraints are firstly that no more and no less than 100% of the available capital be allocated between the assets (i.e. the weight vector must add up to 1.0). Secondly, negative allocations to assets are disallowed. And lastly, that capital should be allocated to at least so many assets in the portfolio. The latter being a cardinality constraint. Two common techniques are used to ensure that particles satisfy the constraints,

For my research I repaired particles such that they satisfied the set of constraints. I used the second technique to simulate the impact of transaction costs on the performance of the portfolio. For more information about these constraint handling approaches please contact me or request a copy at the end of this article if you would like a copy.

Carry trades have been the topic of much research because they violate the uncovered interest rate parity condition (UIP). UIP states that interest rate differentials should be offset by fluctuations in foreign exchange rates over the long term. Under this condition carry trades are theoretically not profitable, however, carry trades have generated relatively consistent profits for more than a decade albeit at the risk of foreign exchange gains or losses. Consider the following hypothetical example of a trader entering into a carry trade between the Japanese Yen (¥) and the United States Dollar ($)

By diversifying the investment across multiple currencies the risk of foreign exchange losses can be mitigated but not removed. Therefore, portfolios of carry trades are inherently less risky than individual carry trades. The objective of portfolio optimization in the context of a carry trade portfolio then is to further mitigate the risk of foreign exchange losses whilst improving the return on investment realized by the portfolio. Consider the following illustration, 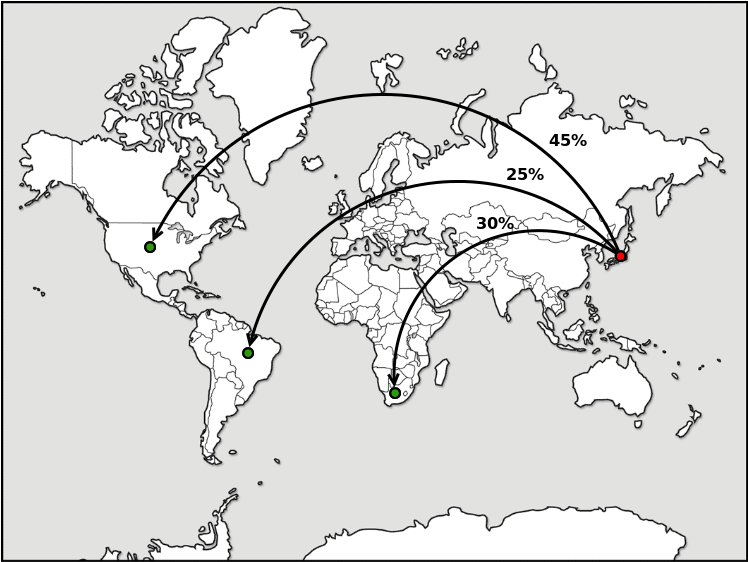 Carry Trade Portfolio between the Japanese Yen, United States Dollar, South African Rand, and Brazilian Real. The objective of portfolio optimization is to determine how much capital should be allocated to each trade to optimize the risk adjusted returns.