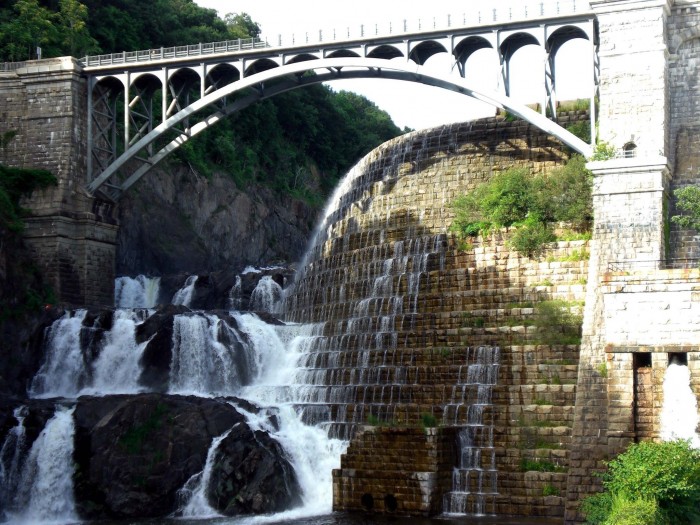 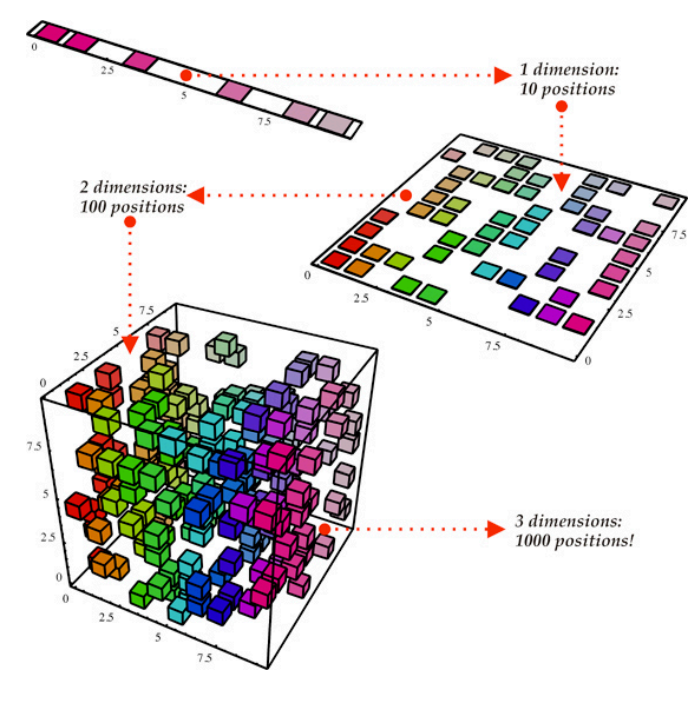 Discussing each is beyond the scope of this post. That having been said, I invite the reader to follow the above links to write-ups on the applications of dimensionality reduction.

The remainder of this article draws much inspiration from a fantastic and succinct tutorial by Professor Alexander Gorban from the University of Leicester.

, are linear re combinations of the variables in our data set,

, are derived from the eigenvectors of the co-variance or correlation matrix of our data set. Symbolically this is expressed as,

It is often sufficient to select the first

, is greater than or equal to some threshold,

, to the number of principal components,

. Some challenges exist when using PCA. Firstly, the algorithm is sensitive to the scale of the variables in the data set, therefore it is advisable to perform mean centering and rather use the correlation matrix of

as it is normalized. Another challenge with PCA is that it is inherently linear. Non-linear adaptations of PCA exist including non-linear PCA and Kernel PCA which exploits the awesomeness of the Kernel Trick:

For an example application of PCA to a financial data set in WEKA, a popular Java data mining software, scroll down the appendix.

Self Organizing Maps (SOMs) were originally invented by Kohonen in the mid 1990's and are also sometimes referred to as Kohonen Networks. A SOM is a multi-dimensional scaling technique which constructs an approximation of the probability density function of some underlying data set,

, which also preserves the topological structure of that data set.

This is done by mapping input vectors,

, (neurons) in the feature map,

. Preserving the topological structure simply means that if two input vectors are close together in

, then the neurons to which those input vectors map in

will also be close together. This is the characteristics of SOMs.

Illustration of the mapping done by a Self Organizing Map between the input vectors (input layer) and the weight vectors (feature map). [Source]

The stochastic and batch mapping (learning) algorithms work as follows,

[1] The update rule for each weight vector is:

is the neighborhood function of the best matching neuron,

is the weight vector being updated, and

is the dimension in the weight vector being updated.

input vectors to the weight vectors, where

is the number of neurons in the SOM, and (3) randomly sampling weights in the subspace between the first and second principal components for the data set. It is best to test different initialization strategies empirically when developing the model.

The difference between SOM and clustering, however, is that a clustering of a data set will (generally speaking) preserve the probability density function of the data set, but not the topological structure of the data set. This makes SOMs especially useful for visualization. By defining a secondary function which transforms a given weight vector into a colour (for example) we are able to visualize the topology, similarity, and the probability density function of the underlying data set in a lower dimension (usually two dimensions because of the grid). 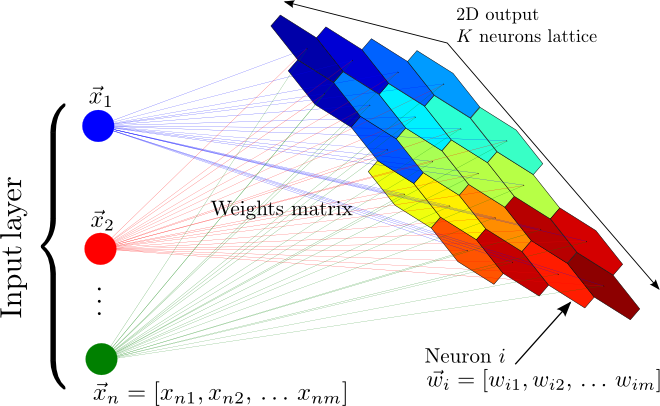 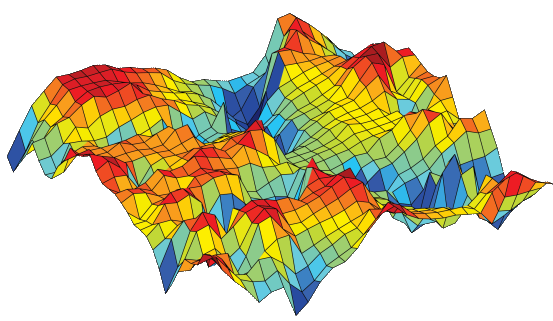 As with PCA, SOM also suffers from some issues. Firstly, the number of neurons needs to be specified upfront; if too few are specified then heterogeneous classes of input vectors may be mapped to the same neuron; if too many are specified homogeneous input vectors may be mapped to different neurons. To deal with this, the growing self organizing map was developed. Another challenge is the computational overhead of finding the best matching neuron for an input vector, shortcut winner search was developed in response to this.

"Weka is a collection of machine learning algorithms for data mining tasks. The algorithms can either be applied directly to a dataset or called from your own Java code. Weka contains tools for data pre-processing, classification, regression, clustering, association rules, and visualization. It is also well-suited for developing new machine learning schemes." [Source]

One of the features in WEKA is a tool for selecting attributes and performing dimensionality reduction. One of the supported algorithms is Principal Component Analysis. This example applies PCA to a .CSV file containing twelve correlated technical indicators. Redundancy is one of the qualities of data which causes models (especially machine learning models) to over-fit. 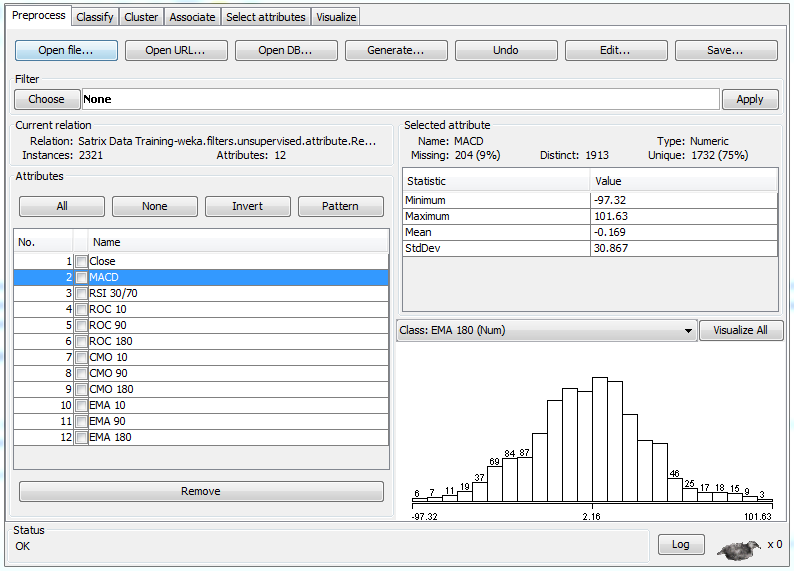 In the select attributes tab, choose the Principal Components attribute evaluator and WEKA will automatically select the Ranker search method. 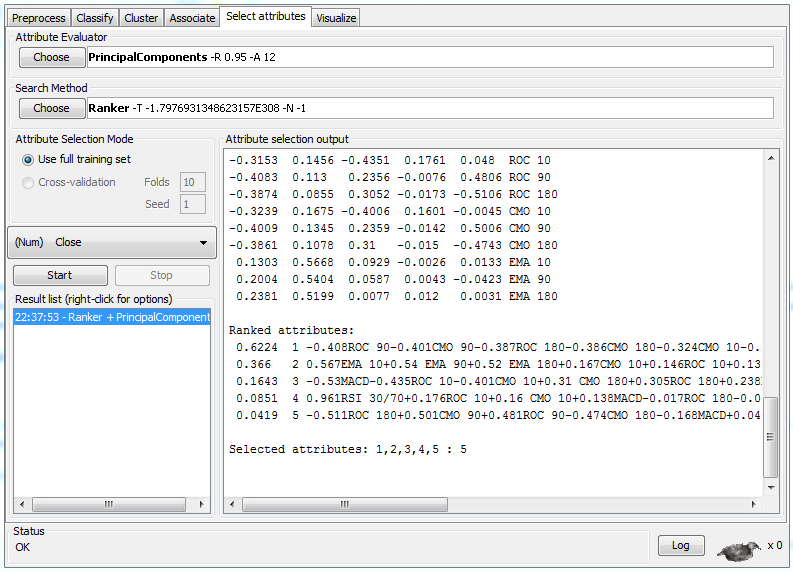 After clicking start, WEKA extracts the first five principal components. As can be seen, the correlation coefficients of the first three principal components to the closing price are 0.6224, 0.3660, and 0.1643 respectively. Knowing PCA, these three components are uncorrelated and should, in theory at least, contain different information about the movement of the index.

Please note that the above trivial example is intended simply as an illustration of WEKA's capabilities and nothing more.